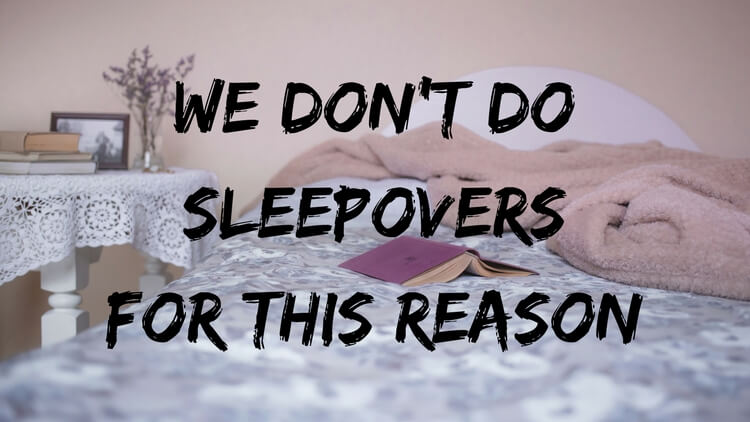 I didn’t expect to feel this way. It was just a sleepover. Even though we don’t do sleepovers. One and done is how I’m feeling now. I guess I should have expected it. For some stupid reason I tend to miss simple grief triggers until they are staring me in the face. Maybe it’s better this way? Less anticipation so it’s just like ripping off a band aid and powering through.

We did the kid exchange at my house because it’s basically in the middle. The three BFF’s would have their first sleepover together. They had big plans to celebrate a birthday at a Legoland the next morning so it just made sense. One of my friends asked, “Are you OK with her going? Are you ready for this?” Her question seemed to surprise me. I couldn’t figure out why she was asking me that. I had been so focused on whether or not my daughter was ready.

The night before she was in tears talking about it. She was torn between wanting to go be with her friends and wanting to be where we were. The world may not see she grieves the loss of her big brother, but we do. Anxiety and separation are a big part of it. For the first year after his death, she slept on the floor in our bedroom because she was too scared to sleep in her own room away from us. I don’t blame her. I had my own fears of that side of the house.

The morning of the sleepover, she had pumped herself up to go. I expected she would knowing full well her issues wouldn’t kick in until it was quiet and time for sleep. What I didn’t expect was to have my own kick in about the same time.

She’s not in her room tonight and I’m a hot mess.

It sounds really strange, but it was my moment of realizing just how much I would miss her if she were gone.

She’s coming back, I know. Yet, my mind has spent so much time trying to make sense of one empty room. Two was too much. I still find myself starting to ask where Cameron is. An empty room has become a trigger. The house is so quiet even when it’s not. So, where is Melia? It somehow feels eerily the same.

Once you’ve lived child loss, you’d think it would be easy to imagine what it’s like for any of your children to be gone. Tonight I realized I don’t have a clue! It was a shock to my system to feel her absence. The first time I got a glimpse of what it would be like because I know you don’t really know until it happens. I could almost feel the floor falling out…again.

She made it through the night. So did I. Though the text I got at 1 AM told me she wrestled with her grief to make it happen. She asked them not to call me. Like me, she ripped off the band aid and powered through. It breaks my heart that this has become our life. Only 5 years old with the weight of death on her shoulders. It’s not fair.

Other Posts You May Enjoy:

4 Comments on “We Don’t Do Sleepovers For This Reason”