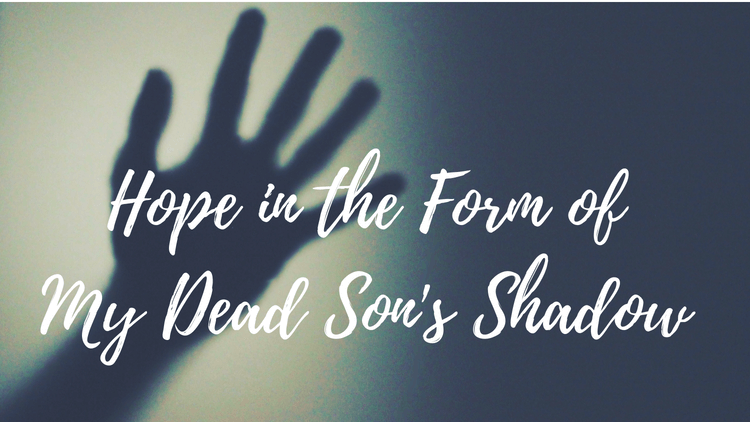 From the corner of my eye, a shadow of movement streaked across the balcony. I looked up, half expecting to see one of my kids playing, but the balcony was empty. No one there.

I turned my attention back to the sink full of dirty dishes and continued scrubbing. A few moments passed. There it was again!

My eyes averted up and quickly scanned the entire length of the balcony, but nothing had changed. What was that? Am I going crazy?

By this time, I started questioning my sanity. My mind started saying, “I swear I’m seeing Cameron. It’s like he’s running from one end to the other and slipping behind the wall to hide as I look up.” But, my son died last month. That’s not even possible! Or is it?

A few days passed. Again, I found myself standing at the kitchen sink. This time the shadow drew my attention to the other side of the room. Standing directly in front of his urn was the full figure shadow of my son. His exact size and shape.

I gasped. My hands grabbed the edge of the counter to steady my balance. Almost as quickly as I saw it, the shadow vanished into mist. It was gone. I had no idea what was going on, but my mind was reeling. That was Cameron!

While there was no doubt in my mind, I didn’t tell a single soul. I knew how crazy it sounded. People would assume I was a grieving mother who would do anything to connect to her son, her mind must be playing tricks. I had moments I started to believe it myself.

My husband and I went to our first medium. He jumped through hoops so she wouldn’t know our identities prior to the reading or have any opportunity to research us ahead of time.

Going into the appointment, I was nervous. My brain was a jumbled mess. I always believed before. However, this visit would make or break everything I believed in. I needed it all to be real. To know Cameron was still around us.

Having seen his shadow was somehow so far from my mind. When she brought it up, even I was shocked. She said, “You’ve been seeing shadows.”

My husband skeptically replied with a no while my jaw hit the floor and I said, “Yes… I have.” His head snapped in my direction, bewildered at my response, “You have?”

Before I could respond, she said, “Those shadows you see are your son. He loves to run now that he is free of the restrictions we have here on earth. He can run so much faster and loves running through your house.”

I just smiled. I knew it.

He was sending me a clear message he is still here. While his physical body is gone, he is very much present. Life goes on after death.

My son sends me many signs. It was more than a year later when I saw him again. This time his shadow raced past my bathroom door. When I saw it, there was no doubt in my mind it was him. I knew he was running. I just knew.