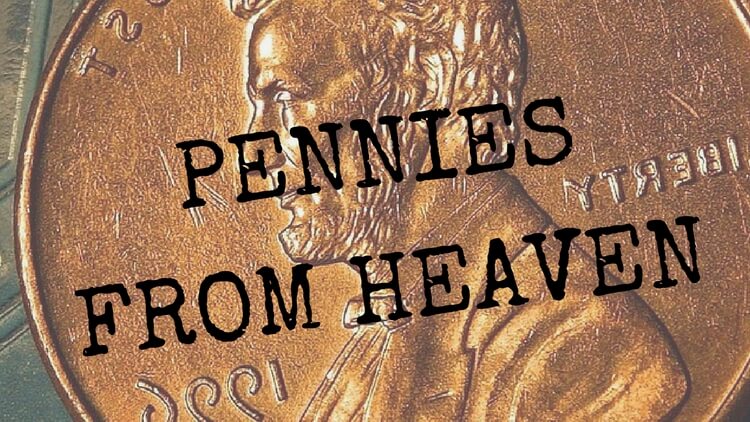 Everyone has heard the concept of “pennies from heaven”. There is a saying that when a loved one misses you, they toss a penny down from heaven. While a mere coincidence to some, others see a synchronicity that just makes sense.

Before my 7-year old son died, I believed in signs sent from the other side. However, looking back I didn’t really understand it as I do now. You see, I used to think that people would just see a particular sign and relate it to their loved one. Every penny randomly found would make us think of Cameron. Therefore, we would basically turn the coincidence of finding a penny into our own sign. I was shocked to find that is not at all how it works!

When Cameron died, I opened myself up to signs. This was not something I shared with my daughter. After all, she was only 4-years old. It is my firm belief that she needs to experience things for herself and determine her own belief system. She knew nothing about pennies from heaven!

Then she started finding pennies!

There was nothing special about the day it happened. At least not that I was aware of. This sign is hers so I’m sure the timing would have made sense for her if she understood it.

I was standing at the sink washing dishes. Melia stood nearby. I saw her bend over and pick something up. She carried it over and opened her hand to reveal a penny. It was the first time I thought about pennies from heaven.

“Look what I found, Mom!” She put the penny on the counter beside me.

Melia disappeared into the living room to play.

Not 30-seconds passed and she was back at my side. She held up her hand again. “Look! I found another penny.”

I thought it was a little strange. We never pay with cash. Because of that we never have cash just laying around the house. So I asked her, “Where did you find that one?”

She said, “I don’t know. It was just sitting on the floor beside me.”

Again, I said nothing about Cameron or pennies from heaven. She disappeared back into the living room. Seconds went by and she came running, excited back into the kitchen.

“Can you believe I just found another one?!” She was practically squealing with delight.

I said, “Are you kidding me? Where are you finding these pennies?” Her response nearly knocked me to the floor.

With a smile beaming from ear to ear she said, “I know why I keep finding pennies! They are from Cameron. I think someone in heaven gave Cameron pennies and he keeps dropping them down to me.”

Holy crap! Did I just hear what I thought I heard? Yep. She knew beyond a shadow of a doubt these pennies were from Cameron. It blew me away. Little did I know, this new game would continue. That night at bedtime, she found another.

This trend continues. There is always a synchronicity to it.

We went bowling with Cameron’s teacher and her kids. Her daughter is one of Melia’s BFF’s. Cameron used to ask if we could plan a play date with his teacher all the time. He knew her kids, but I think he secretly wanted the play date so he could play video games with her. They shared a love for Mario.

That night we were the only group at the far end of the lanes. There were five of us bowling on the same lane. Halfway through the game, her daughter bent over and picked up a penny. It was literally laying in the middle of our lane, exactly where you stand when you release the ball. There is no way we could have missed a penny laying there. Yet, there it was! We knew it was from Cameron.

I have never validated the story of pennies from heaven. When she finds a penny she tells me it is from Cameron. Our first time going to a new taco shop (we all love Mexican food), she sat down at a table while I ordered. There in the middle of the table was a penny. While we were prepping for Hurricane Matthew filling sand bags, there was a penny. The first time we went to play mini golf (his favorite), she found a penny.

It always brings a smile. I am forever grateful that she has a special way to continue her relationship with Cameron. To us, pennies from heaven is more than just a story. There is absolutely no coincidence involved. We don’t find pennies and think of Cameron. Cameron leaves pennies for her to find in exactly the right moments he wants her to know he’s there.