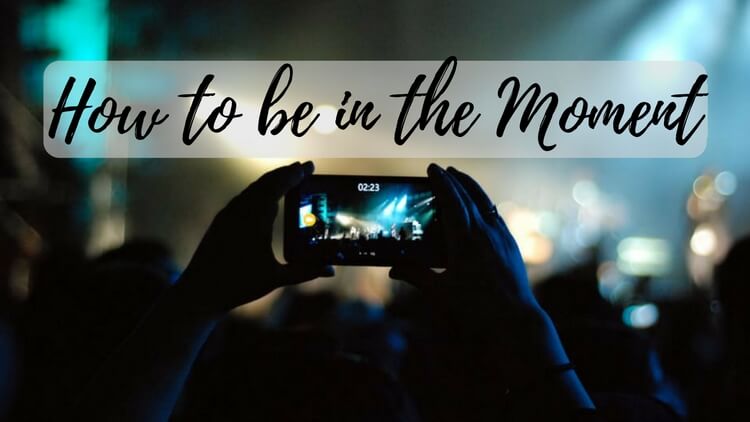 Be in the moment. A goal for most parents. Seemingly unattainable at times, but a goal nonetheless. This phrase is constantly being offered up as advice. Remove all distractions and slow down. Live your life in the present moment. Take it all in.

As a society we are obsessed with cell phones and technology. Regardless of where we are, our noses are glued to the screen. I know I’m guilty!

When we are “in the moment”, we still have our phones out trying to capture the perfect picture or video. How often do we really take time to put our phones down and just be IN the moment? Memorize the people, the place, the smells, and the feeling of the exact moment?

My daughter had her first ever stage performance last week in dance. It was a pretty big deal. The stage was at a public event. She was beside herself with excitement. The night before she barely slept.

One of my best friends gave me advice before the big night. It had a unique spin to it that I appreciated. She told me to make sure I look up from my cell phone screen while recording. Try and actually watch her performance as much as possible to really take it in versus focusing so much on capturing the video.

Her experience had taught her that when she didn’t actively attempt to watch a performance, she didn’t seem to remember it as clearly later. Almost like she hadn’t been there in person. Like she had watched someone else’s video of the event. It felt like second hand knowledge.

It made sense. All of her focus had been on the screen, ensuring the images were centered and the lighting was good. That 3 inch square became her reality for those minutes she was recording. The most important minutes of the event. Not once had her senses actually engaged to participate and be in the moment enough to take note and remember.

On my daughter’s big night, I was ready! She shined on that stage. When the music started she dominated those steps and performed her heart out. She knew her moves and only seemed to miss a beat when she was distracted by the girls next to her. We were so impressed!

In spite of the crowd of parents around us and difficulty seeing the stage, I made sure to look past my screen and watch her dance. To take in the environment, the sounds, the feeling. Especially the confidence and excitement being projected back from the stage.

I’m so glad I didn’t miss out! That was one performance I am happy to have committed to memory. Later I watched the video over and over.